People who infuse their souls into the sake they brew…. 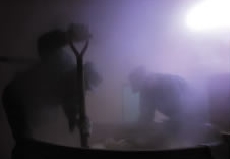 Brewing of the first Daiginjo of the year begins. Moving the brewers who work swiftly in a state of no-mindedness is brewmasterYanagisawa’s unspoken instructions.Koji spores are sprinkled on the steamed rice with expert teamwork. In the Koji room, there are several brewers already starting on the next process‥‥.

On an auspicious day the brewers purify their bodies in the morning and change into sacred white robes. Finally the first Daiginjo of the year is going to be squeezed. What they are working on is the traditional squeezing method of “DaiginjoShibori” and Nanawarai’s pride, “FunaShibori”. The squeezing bags that have been used with care for almost 20 years.

Soon, a clear sound resonates throughout the brewer, and the mild aroma of sake fills the room. The brewmaster takes the first sip….he silently nods and then smiles. The tasting cup is then passed on to the onlooking brewers, who all share the freshly squeezed flavor. Then it is poured into10 bottles of tobin flasks, and set in a place that has the best energy. Now they must wait quietly for it to mature.

They say sakes are like their brewers…
That’s why you know the flavor of the sake when you see the face of the brewmaster. If the brewers have a magnetic personality and gentle tolerance, the energy of the brewery rises and the sake brewed will smile brilliantly.

Brewing sake is similar to “praying”
Sending prayers to the Gods of sake at Matsuo shrine, praying for the forefathers that sustained Nanawarai, praying to all things in nature and the Gods of Yaoyorozu. Nanawarai’s sake is born from the fusion of the power of the many Gods that dwell in nature in the region and the souls of brewmasterYanagisawa and other brewers. 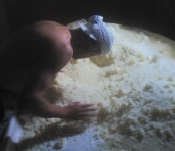 “No matter how busy, no matter how bitterly cold, it’s strange but my health is better when I’m in the brewery”. There is a sense of innocent pride in these words of the chiefbrewmaster, as he was born and raised in Kiso Shinshu, and has continued to brew sake at Nanawarai for over 20 years. Sake brewing at Nanawarai continues until the end of March when the petals of the late blooming plum flowers starts to fall.